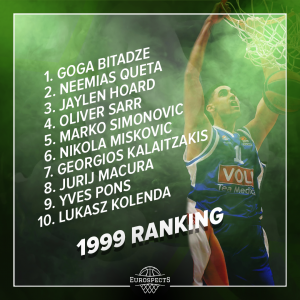 Nikola Miskovic is having tremendous second half of the season in ABA Liga for Mega Bemax. He is getting more consistent and scored in double digits in 11 from last 13 games. Basically since Goga Bitadze joined Budocnost we can state that Nikola was a leader of the team. Most memorable performance during that stretch was definitely 30 point game in loss to Partizan Belgrade. He posses buddying skillset and 6’9 but still needs to work on strength and prove himself as a reliable 3pt shooter & defender but seems like he is getting there. 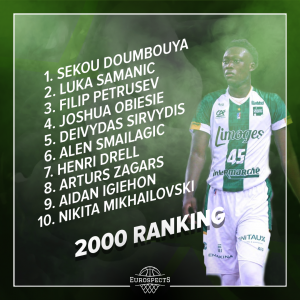 Alen Smailagic got promoted a lot in 2000 ranking. He is a proof that situation is almost everything while evaluating and also while reaching full potential. If he played at the moment in Serbian KLS for let’s say Zemun and averaged +/- 15ppg probably no one would considering drafting him. However given solid offensive role in G League system and being quite reliable helped his stock drastically. He may not be perfect for today NBA especially on defensive end but is definitely not out of chance to hear his name being called next June if he keeps performing, declares and stays. 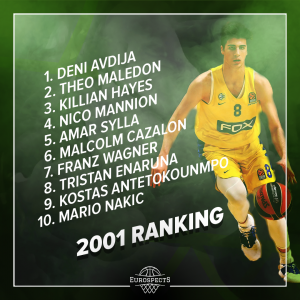 Theo Maledon is having tremendous season for Asvel and numbers or even consistency is mind blowing for someone not even draft eligible yet playing on such a high level. He already made senior NT debut and could arguably sit ex aequo on 1st place with Deni Avdija and at the moment seems like a strong candidate for being selected in lottery of 2020 NBA Draft. Next season his team will take one of two spots in extended Euroleague and watching Theo on highest possible European level will be almost as fun as with Luka Doncic not so long ago. 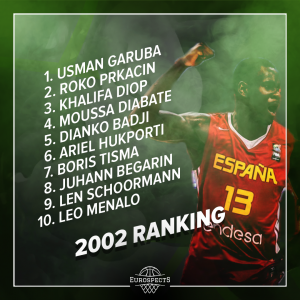 Ibou Dianko Badji will sit now #5 in 2002. He may actually be the one of the most tantalizing prospects all over the world his age. To say he is gifted is a huge understatement. His tools are unmatched and equally equipped physically players are extremely hard to find. Barca is known from decreasing the stock of top prospects last seasons but having such an obvious potential for possibly fruitful NBA career you just gotta change the way you act. Worse case scenario if Barca doesn’t gain NBA buyout next years, club may finally have a stopper and competitor for Walter Tavares and their biggest rival from Madrid.