After missing U16s last summer due to injury, Filip Petrusev was integral part of crowned Serbian U18 team which has just won European Championship. Serbian forward showed his high IQ, ability to post up and exceled also on defensive end by securing the rebounds and even rim protecting.

The experience was huge for me, that is a big tournament where I got to play again against the best players in Europe, compare with them and see where am I and my game at right now. The preparation for EC also served me well. We really worked hard and I had really good players to play against on practice.

.@PetrusevFilip made his presence felt in the paint and played major role in Serbia's comeback vs Italy at #FIBAUEurope (via @hgyenitepe) pic.twitter.com/QZgMeqyuiB

Apart from basketball and trainings, friendship was another important factor why Filip enjoyed his comeback to Europe.

They are all awesome guys so we had really good atmosphere especially going to European Championship. During the tournament, we really show our character going from game to game. After first loss, we came together, started winning, proved our quality and played tough & smart no matter against which team. That’s why we won it all.

During the tournament big burden was on the shoulders of underaged players. Beside Filip there were two more 2000 born frontcourt prospects in the roster – Marko Pecarski & Balsa Koprivica. All of them know each other from youth teams in Belgrade. Also every mentioned player is at least Top 10 ranked player in Europe in their generation. Is there any extra rivalry in this group?

I would say that there is always some competition between guys playing in the same team at the same position, but in our case that competition barely exists because I know Marko for really long time, we’re very good friends and we like to play with one another. Balsa came this summer after 5 years, but we accepted him very well and we also became good friends. 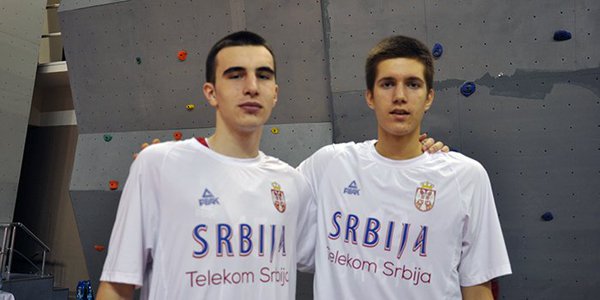 Last summer Filip also took his talents behind the big water. How was last season at Avon High School in Connecticut?

It was really a year of adjustment for me. I came injured so I wasn’t able to play first part of the season. The second part of the season for me was coming back from injury and adjusting to tempo and physicality of US basketball which is way different than European style of playing.

As Filip fully recovered and got used to new environment he was able to showcase himself and get some recognition.

After high school season I got to play a couple of AAU tournaments. I think I show my true face and brought some attention from college coaches.

Shortly after arrival in United States, Petrusev made somewhat unexpected decision to play for Hartford during his NCAA career. However last month he decommitted and now whole process of choosing right collegiate fit is picking up.

Since my recruitment started again a month ago, there are bunch of schools contacting and reaching out to me. The next step would be starting to cut the number of schools down to maybe five, which will take some time. Then take the visits to those schools and after all that make the commitment so I think there is still a lot of time until that happens.

Recently Serbian talent made one more important decision. He joined Montverde Academy – elite college preparatory program with long list of drafted alumnis. What are his expectations regarding 2017/2018 season?

I expect tough and competitive season. Montverde is a place where I will have a lot of exposure and be able to play on the highest level in the US with and against the best players in the country. I will be well coached as well and my goal will be to try to start slowly transitioning from high school to college basketball.

Indeed it will help him to bring even more interest from High Major programs. During the team with the Eagles, Filip hopes to improve his physicality as well.

I want to get bigger and stronger. Also keep developing my basketball skills, but without body you can’t use your abilities and talent on a higher and higher level. So body is my number one right now.

Summer was extremely busy period for Petrusev. After the Championship and before the flight back to US he participated in co-organized by NBA & FIBA Basketball Without Borders Camp in Israel. How was his introduction to some of the people from National Basketball Association?

Huge experience for a guy this age, the opportunity to work with top NBA players and coaches and learn from them at this age means a lot to a young player. The organization was outstanding as well and I’m also happy that I made the all star team and have the opportunity to maybe go to Los Angeles during All-Star Weekend.

Like every young player Filip dreams about being drafted. Does he think that in few years he will be meeting all the people from NBA world on the regular?

Maybe it is still too early to say, I think I have the potential to play in the NBA, but I will have to work extremely hard and keep developing all aspects of my game and bring them to whole another level in order to play in the best league in the world. Anyway that is my goal and that is what I’m working for.