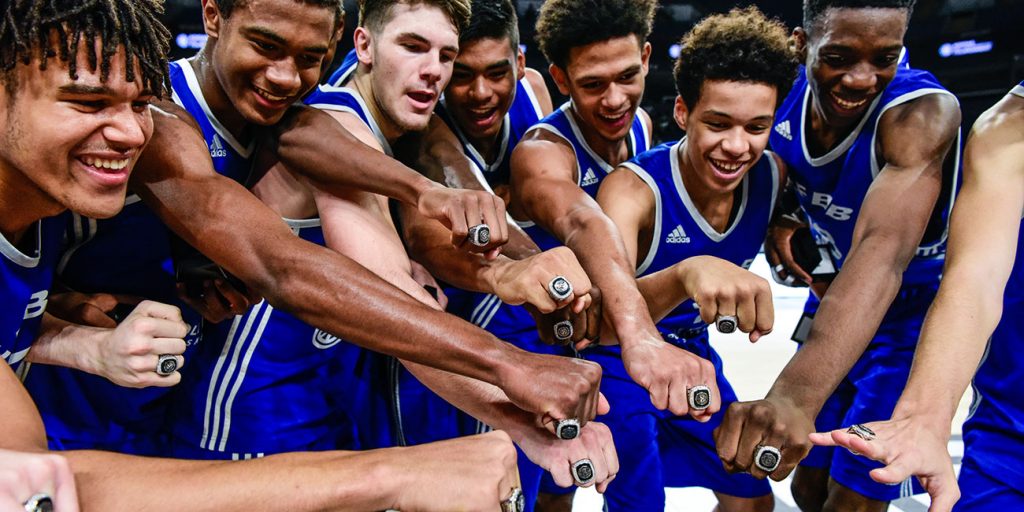 2016/2017 season Adidas Next Generation Tournaments are in the books now. Below you can find team by team rundown from the final

Absolutely well deserved but somewhat unexpected winner at least before the start. Team from Paris brought many oohs and aahs in the opening game against Barca and then just picked up where they left off in other match ups. CFBB was clearly the most composed participant that displayed amazingly mature basketball on both ends of the floor. Tremendous defensive cooperation led to many steals which eventually led to the easy buckets. Offensively, the ball movement was just as good as it gets at U18 category. It was fun to watch for spectators. Moreover fun to be played by French prospects as they seemed to have perfect chemistry and didn’t really care who scores. Yanik Blanc who signed with Poitiers (Pro B) made a couple of really big shoots. Also showed super confident attitude and above average athleticism. Theo Maledon proved that age is just a number and 16 year old kid can play pretty much like veteran. Ivan Fevrier get ripped last couple of months and really stepped up in this tournament. Sofian Briki was very creative and polished from guard skillset standpoint. Joel Ayayi was productive off the ball and played on great FG%. And finally Timothy Bazille revealed potential as a highly energetic back up Center for the best French team. He covered a lot of ground defensively and hedged ball screens perfectly. Before I finish I have to add that this achievement gets even more impressive considering that there is no more of Sekou Doumbouya, Yves Pons, Oliver Sarr and Jaylen Hoard in the roster.

Mega was close to win this leading in 4th quarter against INSEP. However this is very satisfying result for the team from Belgrade considering how big skills gap there is between Nikola Miskovic, Goga Bitadze and the rest of the players. The great duo rised to the challenge as usual and this time gained a lot of help from Mihailo Jovicic who is a point guard with large pair of shoulders, toughness and decent vision. Speaking of Georgian Center who seemed to be in even better shape than during qualifying round and had some dominant periods.

Very competitive team that was ready to challenge every other participant. CSKA had a very good roster from physical standpoint. Russians had couple of interesting guard: Dmitrii Gusenkov, Yury Umrikhin and obviously Aleksander Ershov. The last of them was not as spectacular as during qualifying round in Kaunas where he was named the MVP. Especially his shot selection and leadership qualities left a lot to be desired. Beside Umrikhin who showed lightning quickness and broke some ankles the biggest positive surprise was Viktor Lakhin. 2001 born very long and lanky frontcourt prospect was never overwhelmed and managed to be solid contributor.

Disappointing performance by Spanish team. It was kind of hero ball as on offense everythig was run through Dino Radoncic. He is one of the best players in this generation. Can play with his face or back to the basket and utilizes his strengths perfectly but with overall talent in the roster that Real possess it was possible to find better balance. Honorable mention goes to Khadim Sow who protected the rim and has intriguing defensive potential in general. On the other hand Senegalese Center is very raw offensively.

Another spanish disappointment. Probably no one was expecting the team from Catalunya to lose first two games. However I need to give a credit where it’s due – CFBB and CSKA were really good in Istanbul. Barca was led by Sergi Martinez as usual. Fluid and very well shaped wing was always around the ball making plays in half court and transition. Unfortunately there is no progress shooting wise as he took 45 2pt FG and just three attempts from behind the arc (all of them to no avail). Nikola Zizic was doing Nikola Zizic things and was very solid all tournament long. Arnas Velicka was good but not great and this time finally missed a big shoot against Moscow. Croatian forward Luka Samanic was better and better each game and finished ANGT finals with rising star award.

The host team made a surprising win in the first game against Zalgiris which extended their dream of advancing to the final. One more time Ahmet Can Duran was the best player on the team. Also Efe Ergi Tırpancı was a positive surprise. He is an aggressive offensive minded player with decent ballhandling ability. Standing at 6’7, has a sweet stroke and has range up to three point line.

Not so much to write about this awful performance as probably even players and staff most likely want to forget it as soon as possible. The only bright spot was Aleksa Uskokovic performance who tried to be a vocal leader and keeps improving with every big tournament. Serbian Point Guard is a player who doesn’t care who is the rival and just forces him his own style. In ANGT finals Aleksa showed improved pull up game and better vision on the move. He is still not overly consistent but can be extremely hard to stop when starts the game well. Zoran Paunovic and Vuk Dordevic were the only other Red Star members who didn’t completely fail in this tournement.

This year roster is not loaded with talent as there is no more Isaiah Hartenstein or Gytis Masiulis. Zalgiris secured the spot in the finals but that was all they had in 2016/2017 season especially with Ignas Sargiunas out of the tournament. The best performer in Istanbul was Rokas Jokubaitis – lefty skilled guard with ability to shoot off the dribble but a bit limited physically. Other worth mentioning prospects: Erikas Venskus – frontcourt player with polished mid range and post game who posses average size and operates below the rim as well as Vitalijus Kozys – guard who made couple of extremely difficult shoots and contributed on the glass.