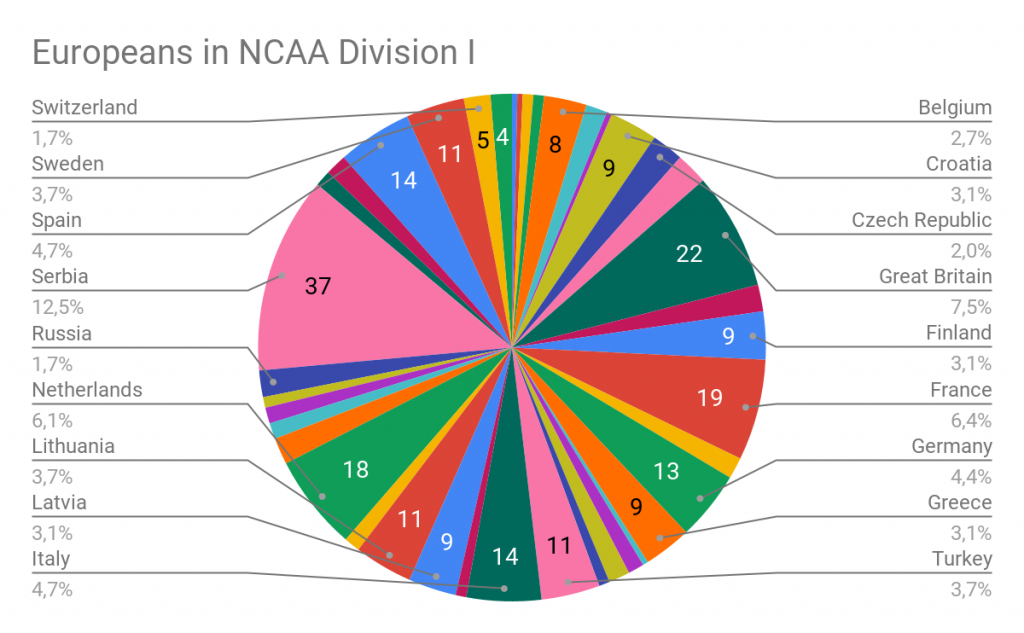 Tristan Enaruna (Kansas) : 6’8 forward with great athleticism was being recruited heavily by Georgia Tech, Miami, Texas Tech and Creighton but decided to join one of the most prolific teams in the NCAA, Kansas Jayhawks. Netherlands native was playing in Wasatch Academy. At the U18 European Championship in Volos, he put up great numbers but struggled from beyond the arc dramatically. He will have to get up to at least over 30% from 3s in order to raise his stock. On the other hand, his combination of speed, size, strength and motor makes him definitely a one to watch for the upcoming season.

Franz Wagner (Michigan) : Following his older brothers footsteps, Franz also committed to Michigan Wolverines. Lately his injury troubles haunted him, if he gets healthy and play regularly without a doubt he will a be centerpiece for the team. He declined big contract offer from Alba to play for Michigan even without Beilein’s departure to Cleveland Cavaliers. He had a below par performance in U18s last summer and the latest news that he fractured his right wrist will cause him to miss at least the first month of the season. As the NCAA season is somewhat short, he will have much less time to prove his worth in Michigan.

Nico Mannion (Arizona) : HS phenom Mannion has committed to Arizona therefore rejecting offers from Duke and Villanova. It is highly possible to see him jump right in to the rotation as the team is coming after a somewhat of a tough season, only finishing 8th place in PAC-12 last season. Most of the memories of Nico Mannion comes from the U16 European Championship in Podgorica, as Mannion dominating the floor with impressive shooting and his relentless motor.

Santi Aldama (Loyola Maryland) : Santiago Aldama comes from a terrific U18 European Championship campaign with Spain where he looked to have improved a lot in the last two years. He will play this year in Loyola Maryland, looking at his potential and capacity he already looks like the steal of the season in NCAA. He has a great chance of see a lot of playing time and get his name on the draft sheets. He is a kind of do-it-all player with versatility and size. His ability to play both forward positions and stretch Center will grant the team a lot of options regarding rotation.

Pavel Zakharov (Gonzaga) : Gonzaga continued their trend of recruiting top level European bigman to the system with Pavel Zakharov. Russian bigman drew a lot of attention from NBA teams already with his performances in individual practices in NBA Global Camp and then attended to Montverde Academy, which is regarded as one of the top in US with a lot players found their way into the NBA later on. It will be a tough season for him as the rotation looks pretty stacked already with the likes of Filip Petrusev, still he has a great chance of playing with Oumar Ballo getting redshirted.

Omer Faruk Yurtseven (Georgetown) : Yurtseven transferred to Georgetown last season and missed the last season as a redshirt. From the little footage we have seen from the games from Bahamas, he will settle no less than domination. Physically and laterally looks better than ever and looks to have made the most out of his blank season working on his skill-set. He lacked playing time in NC State but the story is different in Georgetown. He will be the primary bigman this year. He will have to deter from getting into foul troubles and has to continue shooting from outside. If he delivers, he will definitely get first round looks considering his skillset.

Neemias Queta (Utah State) : Portuguese bigman has took the NCAA by storm with dominant outlook in his freshman season in Utah State. The team looks to evolve around him. The prospect of even more dependency on him might hurt his stats in some games. He is already an early candidate for the Center of the Season award and that means the focus on opposition defenses will be on him more than ever this year.

Oscar Da Silva (Stanford) : German/Brazilian forward has seen increased playing time in hi second season with Stanford and will look to continue the upward trend this season as well. Perfect glue guy that can play multiple positions and he is a smart team-player. His scoring output might see a leap this year if he can recover from bad shooting games of last season with increased usage rate.

Filip Petrusev (Gonzaga) : Another European Gonzaga big, Petrusev is set to have a breakout this season playing alongside Killian Tillie. He only logged in 11 minutes per game last season and that can only increase if he stays away from injury trouble. His physical profile and basketball IQ makes him such an interesting prospect to watch. His jumper is getting there and it will be important to see him score with consistently at a higher clip.

Jon Gudmunsson (Davidson) : All-around fighter on the court, he brings energy and consisent production to the Wildcats. No doubt they will be a lot of fun to follow along with Luka Brajkovic. He is already drawing a lot of interest from European teams. He will be expected to lead the team this season in an out. He would love to finish his college career with a tournament appearance.

Steven Enoch (Louisville) : As an Armenian citizen, we can count him as a European player. Enoch impresses with strength, mobility, motor and touch around the rim. He will likely be the starting center this season and can get late second round looks. Another Center of the Year candidate.

Alihan Demir (Minnesota): Senior transfer to Minnesota, Alihan Demir had a breakout season in Drexel last season. He looked to have improved so much overall, adding to his high basketball IQ. Even though putting up nice numbers, he struggled a bit from outside with increased volume. Possible to see a reduction of role in Minnesota as the team is more loaded than Drexel.