Every season few players decide to drop out of college and go back or continue their career overseas. According to the rule whether they were freshmen or juniors at the moment, they are eligible for the Draft only following season. During the summer of 2018 European prospects like Elijah Clarance or Fiifi Aidoo made such move as well as their fellow Americans: Tavarius Shine, DeAndre Burnett, Marcus Lovett Jr or Jalek Felton. Last two of them we had a chance to watch live past weeks in Sloboda Uzice (Serbia) and BC Nokia (Finland) respectively. Here’s what we saw: 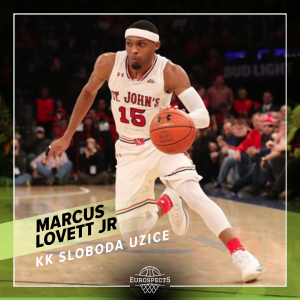 Serbian league is hard to watch from outside of the country (Synergy lacks it) and  that’s why weekend at Adidas Next Generation Tournament in Belgrade was perfect opportunity to take one h drive to Novi Sad to see Marcus Lovett live. Gym located in big shopping mall bringed back last summer memories from FIBA U16 European Championship. Entrance is not really easy to find but you can get there by following the squeak of basketball shoes and smell of cigarettes. Crowd was kinda loud but it was more about screaming than cheering. Probably enthusiasm was related to the pre game made bettings instead of level of the competition and atmosphere was comparable to low division soccer.

Lovett Jr. leaved college but was weighting decision to go pro already one year before reportedly.  It was his 15th game of the season and produces 21ppg on 48% from behind the arc.

Short scoring guard who stands at around 6’0 in shoes. Has a ok profile: high and broad shoulders and lean muscles (should weight around 80kg). Also his wingspan looks a bit 10cm longer than the height. Still it’s nothing close to be imposing and would have to be predispositioned by superior skillset not the body type for NBA standards.

Quickness is his big advantage. Can get up and down very fast after rebound and when he switches his motor on can blow by opponents effortlessly on the level like that. Can make some promising passes here and there (impressed with few pocket dishes out of PnR) but clearly his mentality is to score and often he was occupying SG spot (similarly to St. John’s days and his duo with Shamorie Ponds when they shared ball handling responsibilities).

In first half was very passive like he tried to prove to be team player who didn’t come overseas for quick promotion but then in 2nd part of the game took close to half of the team attempts with obviously questionable selection. Hot cold type of guy. Once scampers around, once kills with his intensity.

Can get his own shot on the perimeter given his handle and shake (especially ability to decelerate, wiggle is good but not elite, doesn’t stand out as much as high school mixtapes back in the day when it could be referred “crazy handles”), posses above average 3 pointer and gets to the lane at decent rate. Finds solid finishing angles (not limited to the left dominant hand only) and has nice body control but rather lacks impressing vertical ability. Needs to achieve balance (maybe suited more for microwave bench type given his high volume game).

Defensively he can be very good on ball given his quick feet and hands but comes too close and gave up some drives because of that. Off the ball and in PnR situations his D gets worse. Neither good effort, nor the fundamentals. Serbian league may be weak as all best domestic guys play all over the world but everyone knows how to play and was able to punish Lovett mistakes most of the cases.

Didn’t look bad for chemistry but didn’t seem like he cares much either as it’s clearly just short stop and trampoline for other contract for him. To sum up, few years ago guard who seemed to have a total package and possibly NBA skill level but seems like he didn’t build much on it and believed his hype too much. I don’t see any reason to give him strong draft look and if I didn’t know his name / history probably would give him less attention while watching this contest.

Lovett may be invited for workout and get small summer league role but that’s it. Don’t see him being close to crack the NBA roster anytime soon if ever. As of now he is too unreliable for much higher Euro level as well. But of course can go up a bit next year. Maybe mediocre leagues like Poland or Hungary where he won’t have trouble to score. Maybe elite 2nd tiers like France or Italy where he can pave his way to the Top divisions by good performances and consistent attitude. 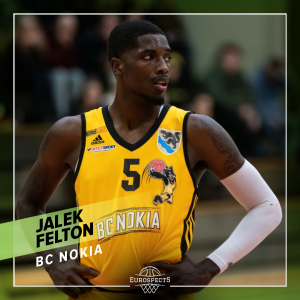 Former Mcdonald All American, privately nephew of NBA vet Raymond Felton and lately North Carolina dropout who was dismissed by the school in undisclosed circumstances. After short stint with Olimpija Ljublana where he played only two games, Jalek chose very safe destination for rookies nowadays and left to city of Nokia in Finland. In Koriisliga he could probably be already the main weapon of best team in competition like Salon Vilpas and debuted with authority by posting 31 points against Korihait.

Long, lean and wide framed Felton is just an excellent offensive player. The way he sees the court and his ability to score are simply tremendous for still relatively young player. He is proper pick & roll executor with naturally effortless style. He can play at different speeds, moreover possess solid ball handling and shooting ability. Unfortunately as much as he brings to the table offensively he can give away on the other end. He doesn’t even hunches, not saying about sitting in proper stance. It’s easy to notice non existing transition defense, plenty of standing around, imitating and late rotations.

The game I attended, Felton was unavailable as he couldn’t practise the day before but most likely assumption would be the same as after going through tape. Overall he is extremely talented player with little appreciation for his gifts who is cheating on the grind. If you could turn back the clock and set his mind right, he could be possibly knocking NBA doors at the moment. However he is where he is for a reason and if he doesn’t become more focused on his basketball job he will be treated less and less seriously as a candidate for competitive environment in strong basketball leagues. No one needs a player who wants to live extravagant NBA lifestyle without belonging there as it simply causes enormous differences between his perception and reality that organization has to coexist with him in. Few more troublesome adventures and there will be left only exotic markets or 3 on 3 tournaments. The sooner he realizes that the better for his career and let’s hope he is aware and capable of making that.