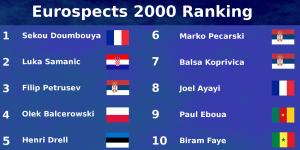 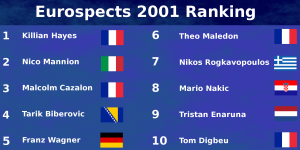 Again there is no changes on the Top in 2000 and 2001 generation rankings. Even though Luka Samanic had superior showing at Junior Tenerife or L’Hospitalet Adidas Next Generation Tournament and he seems to be making legitimate push for #1 spot, Sekou Doumbouya defended it thanks to better performance at Basketball Without Borders Global where he impressed with his unmatched athleticism and sweet shooting stroke at 6’9. Killian Hayes was the only present underaged European player and despite minor knee problems which caused inconsistent performance in Los Angeles, he remains the only ‘01 player with 5 stars. He is followed by Nico Mannion was promoted to the second spot after leading his team to state High School championship.

Most of BWB campers recorded promotion in ranking. We can especially highlight current number 4 – Olek Balcerowski. Polish 7’2 finesse big man has great touch, can shoot from outside and even handle the ball but still needs to work on his quickness and toughness. Beside him Paul Eboua, Biram Faye, Joel Parra, Arturs Kurucs, Martynas Arlauskas and Vit Krejci definitely helped themselves with their performance in Lakers practise facility.

As we have been waiting with update until all the AdidasNGT qualifiers are finished another changes in ranking are strongly correlated to what was happening in L’Hospitalet, Kaunas, Munich and Belgrade. Basically each tournament revealed some standout. Malcolm Cazalon had stunning moments in Spain. Rokas Jokubaitis after outshining Ball brothers in scrimmages showcased his tremendous skillset one more time at homecourt in front of Zalgiris fans. Henri Drell went totally off in Audi Dome where he was pretty much unstopabble. Finally Zoran Paunovic energy and athleticism was too much for any defender in Zeleznik Hall last weekend. Of course they were not the only prospects who stepped up. For instance their breakout performance were supported each tourney by Arturs Zagars, Pavel Zakharov, Franz Wagner (+Mario Nakic) and Federico Miaschi respectively.

Lastly we have to mention debuts. Vinicius Lucio Da Silva and Gora Camara are both 2001 born nearly 7 foot non European prospects who beside length display plenty of long term potential.